An Update on Clones

Even though I've been finding less time to work on it, I've enjoyed the process of hacking on clones and things are going pretty well. Input handling and background rendering are finished and with any luck it will be another weekend until sprites are working. I do expect to need some tweaks for fine scrolling to be implemented correctly so it may be another week or two still until more advanced NROM titles like Super Mario Bros run. It should be a hop, skip, and a jump from there to MMC1 titles like Mega Man 2 though. 🙏 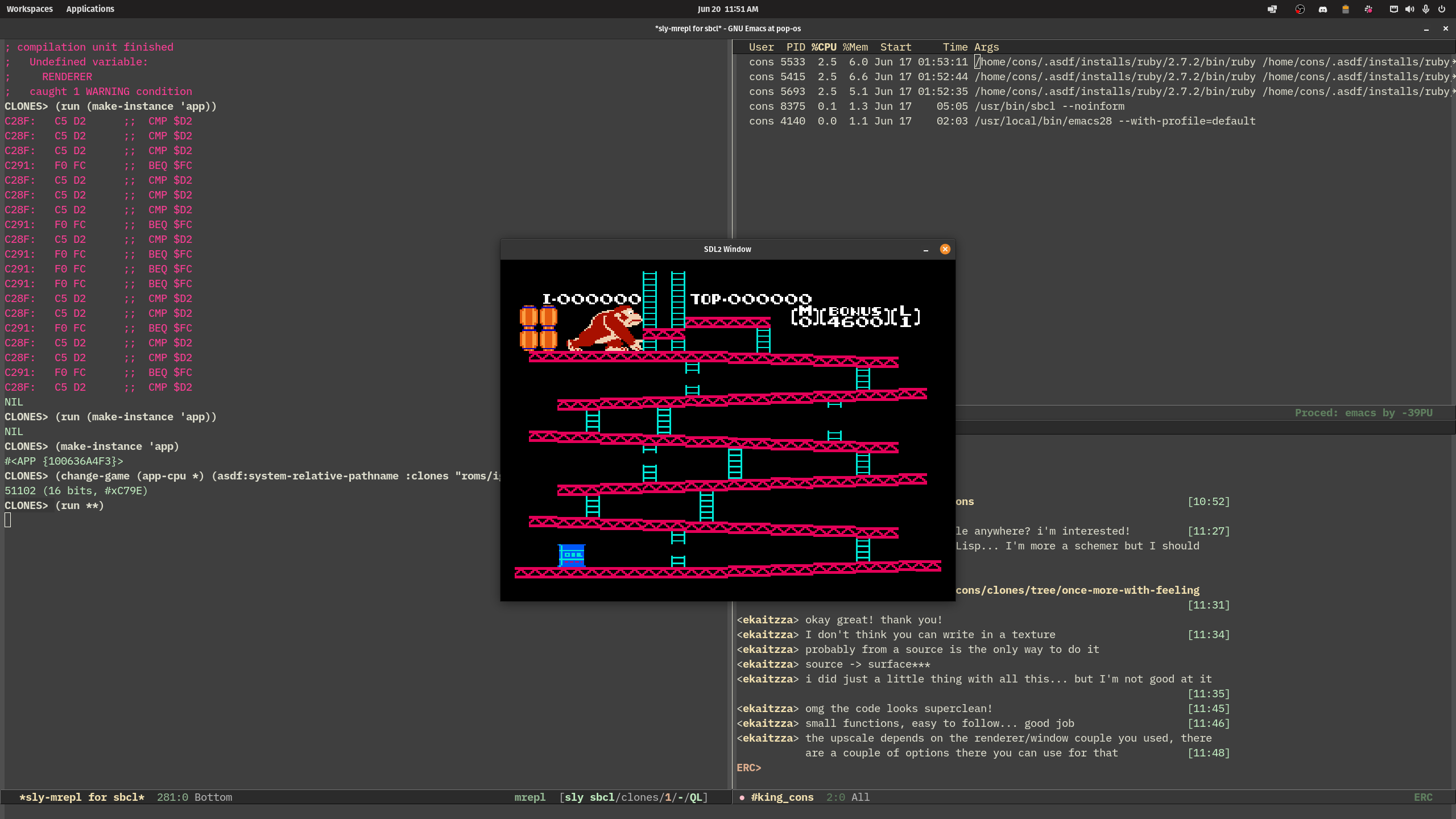 There are 3 questions that have come up pretty regularly though, either on stream chat or elsewhere, and I'd like to jot down some thoughts about them while it's fresh in my mind.

Why are you building clones?

Because it brings me joy. I feel compelled to work on it as a vehicle to try to create something that I find aesthetically appealing and that indulges parts of my curiosity.

Why are you building clones in lisp?

Because it's my favorite language to work in. I don't think the feature set of Common Lisp is critical. Macros, CLOS, and conditions and restarts are all great but the motivating factor for me remains the interactive development workflow with Emacs and SLIME/Sly. When I was young and not yet a programmer, I imagined that at some point working on software or digging into the internals would be more like having a conversation than working out a math problem. Our tooling remains far from those (naive) visions, but Common Lisp is closer to what I imagined and so it feels more comfortable to me. Mikel Evins has written some great posts about this.

What are your goals in building clones?

This is the toughest part to answer. Initially, I'd just like to be able to have a functioning emulator and play childhood games that I loved, like Mega Man 2, tolerably well. Once that piece is completed though, I'm very interested in trying to add tools for debugging and reverse engineering games.

This isn't so much about the games themselves as it is about having better tools for investigating software without access to source code. An emulator is a great place to experiment with approaches to that. Now I admit I have not spent a lot of time doing reverse engineering or security work and am not familiar with the state of the art around static analysis or disassembly tools like IDA Pro.

I'm limited in my ability to express what I imagine. So since I can't tell you exactly what it should be, here's a sketch:

The code is an artifact, the leftover cocoon of the program being written. The interesting pieces are in the constraints of the level design, the physics, the musical score, the artwork. I would like, as much as possible, to have tools for exploring the shape of a process as it lives, exploring the data it operates on, and understanding the constraints of the problem, rather than relying on code to understand one specific approach to solving that problem.

In the abstract, this isn't a solvable problem and I will never have a proof of correctness or confidence in completion. But it's worth striving to see how software in general could leave breadcrumbs behind it, given how much of our ideas and culture are being poured into it and fossilized in amber.